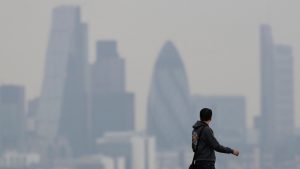 According to the latest data, approximately 2 billion children around the world breathe toxic, polluted air. A part of you probably thinks that this number is not very big when you think about the total global population, but that number is just shy of 8 billion.  What is most important about this number—these 2 billion children—is that they represent 93 percent of all children in the world.

That means, then, that nearly every child in the world is exposed to too much air pollution; and so much so that it is putting them all at serious health risks.

Dr. Maria Neira is the director of the World Health Organization Department of Public Health, Environmental and Social Determinants of Health. She advises, “Air pollution is stunting our children’s brains, affecting their health in more ways than we suspected. But there are many straightforward ways to reduce emissions of dangerous pollutants.”

In addition, WHO director-general Dr. Tedros Adhanom Ghebreyesus notes, “Polluted air is poisoning millions of children and ruining their lives. This is inexcusable. Every child should be able to breathe clean air so they can grow and fulfill their full potential.”

Air pollution, of course, can negatively influence cognitive development in children. It can also trigger asthma and even some forms of cancer.  Data shows that children who have been exposed to toxic air pollution levels may also be at a vastly higher risk for other chronic illness—like cardiovascular disease—at a later point in life.

Dr. Neira goes on to say, “WHO is supporting the implementation of health-wise policy measures like accelerating the switch to clean cooking and heating fuels and technologies, promoting the use of cleaner transport, energy-efficient housing, and urban planning.  We are preparing the ground for low emission power generation, cleaner, safer industrial technologies, and better municipal waste management.”

Of course, the problem is more severe in low- and middle-income countries.  Thus, the issue primarily hits nations in Southeast Asia, the Western Pacific, the Eastern Mediterranean, and, of course, countries in Africa.

In a press release, the WHO stated: “Governments should adopt such measures as reducing the over-dependence on fossil fuels in the global energy mix, investing in improvements in energy efficiency and facilitating the uptake of renewable energy sources. Better waste management can reduce the amount of waste that is burned within communities and thereby reducing ‘community air pollution.’ The exclusive use of clean technologies and fuels for household cooking, heating, and lighting activities can drastically improve the air quality within homes and in the surrounding community.”

Trinseo PLC Given Average Recommendation of “Buy” by Brokerages