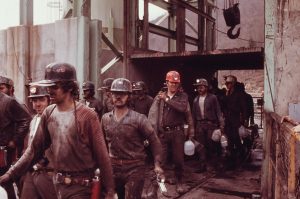 Fifty years ago this week the Farmington Mine Disaster killed 78 men in a coal mine explosion in West Virginia. New health and safety laws were drawn up and implemented nationwide as a result.

There were actually 99 miners underground that fatal day and only 21 escaped. A build up of methane gas caused a series of explosions that tore through the mine.

The disaster became national news and drew attention to Farmington, a small town about 100 miles south of Pittsburg, PA., writes Bonnie Stewart, a journalist and professor at California State University Fullerton in Her 2012 book, “No.9: The 1968 Farmington Coal Mine Disaster.”

“It was on the nightly news. People across the world could see what had happened and what a tragedy like that looked like,” said Stewart, formerly a professor at West Virginia University.

In 1969 Congress passed the Federal Coal Mine Health and safety Act after 40,000 coal miners staged a wildcat strike demanding better health benefits and made the nation aware of black lung disease.

Mines became subject to increased federal inspections, fines and possible criminal penalties for the worst of safety violations. It also provided benefits for minors who became disabled by black disease.

Safety advocate Ralph Nader and his staff was called upon to help write the landmark 1969 law by Davitt McAteer, a mine safety expert who went on to work for the federal Mine Safety and Health Administration under President Clinton.

“It was pivotal for this industry, for the health and safety movement around the country. You saw other industries copy what the mine industry was doing in terms of education, in terms of research, in terms of regulations,” McAteer said.

Several families are suing the mine company after all these years even though the mine is under different management and company attorneys say that the families should have filed suit within two years of the disaster. Some families received a $10,000 settlement shortly after the explosion.

However, new evidence uncovered by the families in 2014 shows that Consolidation Coal, which owned the mine at the time, gave instructions to a head electrician to turn off the alarm ventilation fan used to rid the mine of the deadly methane gas.

Furthermore, this new evidence was filed away by the then district manager of the Bureau of Mines but was uncovered in 2008 by Stewart while doing research for her book.
Despite these discoveries, the lawsuit was thrown out last year. However, an appeal was made by the families, and the 4th US Circuit Court of Appeals asked the West Virginia Supreme Court to weigh in on the statute of limitations.

Mirvac Group to Issue Final Dividend of $0.05 on August 30th