Complete the form below to receive the latest headlines and analysts' recommendations for Legacy Housing with our free daily email newsletter:

Legacy Housing Corp (NASDAQ:LEGH) major shareholder William G. Shipley sold 10,000 shares of the stock in a transaction on Monday, January 6th. The shares were sold at an average price of $15.49, for a total value of $154,900.00. Following the sale, the insider now owns 3,256,667 shares of the company’s stock, valued at approximately $50,445,771.83. The sale was disclosed in a filing with the SEC, which is accessible through this hyperlink. Major shareholders that own more than 10% of a company’s shares are required to disclose their sales and purchases with the SEC.

Legacy Housing (NASDAQ:LEGH) last released its earnings results on Friday, November 15th. The company reported $0.25 earnings per share (EPS) for the quarter, missing the Zacks’ consensus estimate of $0.32 by ($0.07). The business had revenue of $41.94 million during the quarter, compared to analysts’ expectations of $44.22 million. Legacy Housing had a net margin of 15.45% and a return on equity of 12.12%. As a group, analysts expect that Legacy Housing Corp will post 1.13 earnings per share for the current fiscal year.

Legacy Housing Corporation builds, sells, and finances manufactured homes and tiny houses primarily in the southern United States. The company manufactures and provides for the transport of mobile homes; and offers wholesale financing to dealers and mobile home parks, as well as a range of homes, including 1 to 5 bedrooms, with 1 to 3 1/2 bathrooms. 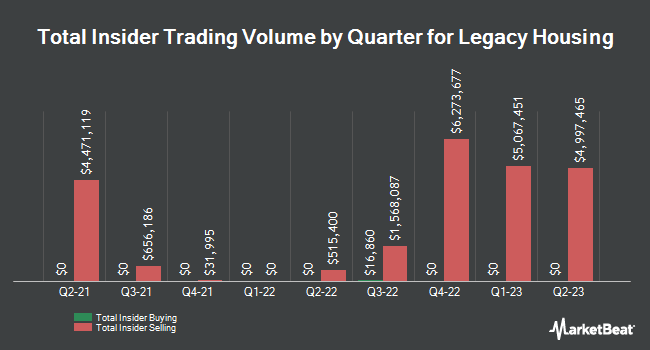