Complete the form below to receive the latest headlines and analysts' recommendations for NIC with our free daily email newsletter:

Dalton Greiner Hartman Maher & Co. grew its stake in shares of NIC Inc. (NASDAQ:EGOV) by 4.5% during the 4th quarter, Holdings Channel.com reports. The firm owned 218,162 shares of the software maker’s stock after buying an additional 9,461 shares during the quarter. Dalton Greiner Hartman Maher & Co.’s holdings in NIC were worth $4,876,000 as of its most recent SEC filing.

NIC (NASDAQ:EGOV) last posted its earnings results on Wednesday, October 30th. The software maker reported $0.21 EPS for the quarter, topping the consensus estimate of $0.18 by $0.03. The company had revenue of $90.39 million during the quarter, compared to the consensus estimate of $88.49 million. NIC had a net margin of 14.55% and a return on equity of 22.91%. The firm’s revenue for the quarter was up 3.9% on a year-over-year basis. During the same period in the previous year, the firm posted $0.24 earnings per share. On average, equities research analysts expect that NIC Inc. will post 0.76 earnings per share for the current fiscal year.

NIC Inc, together with its subsidiaries, provides digital government services that enable governments to use technology to provide various services to businesses and citizens in the United States. The company's outsourced portal business enters into long-term contracts with state and local governments to design, build, and operate Internet-based and enterprise-wide portals on their behalf.

Want to see what other hedge funds are holding EGOV? Visit HoldingsChannel.com to get the latest 13F filings and insider trades for NIC Inc. (NASDAQ:EGOV). 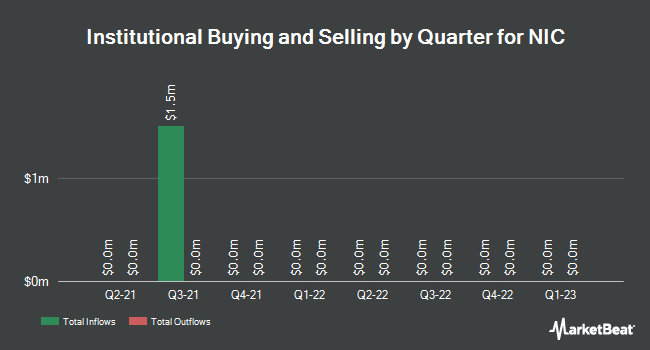 Receive News & Ratings for NIC Daily - Enter your email address below to receive a concise daily summary of the latest news and analysts' ratings for NIC and related companies with MarketBeat.com's FREE daily email newsletter.