Complete the form below to receive the latest headlines and analysts' recommendations for Copart with our free daily email newsletter:

Copart (NASDAQ:CPRT) last issued its quarterly earnings data on Wednesday, February 19th. The business services provider reported $0.65 EPS for the quarter, hitting analysts’ consensus estimates of $0.65. The firm had revenue of $575.10 million for the quarter, compared to analyst estimates of $576.09 million. Copart had a net margin of 32.95% and a return on equity of 32.56%. The firm’s revenue was up 18.6% compared to the same quarter last year. During the same quarter in the previous year, the business posted $0.52 EPS.

Other research analysts also recently issued research reports about the company. Barrington Research reissued a “hold” rating on shares of Copart in a report on Tuesday, February 18th. Robert W. Baird dropped their price objective on Copart from $90.00 to $80.00 and set an “outperform” rating on the stock in a report on Thursday, March 19th. BidaskClub lowered Copart from a “strong-buy” rating to a “buy” rating in a research report on Saturday, March 7th. Finally, SunTrust Banks increased their target price on Copart from $100.00 to $110.00 and gave the company a “buy” rating in a research note on Thursday, February 20th. One investment analyst has rated the stock with a sell rating, two have assigned a hold rating and six have given a buy rating to the stock. The company currently has a consensus rating of “Buy” and an average target price of $86.60.

Copart, Inc provides online auctions and vehicle remarketing services. It offers a range of services for processing and selling vehicles over the Internet through its Virtual Bidding Third Generation Internet auction-style sales technology on behalf of vehicle sellers, insurance companies, banks and finance companies, charities, and fleet operators and dealers, as well as individual owners.

See Also: What are the benefits of a balanced fund? 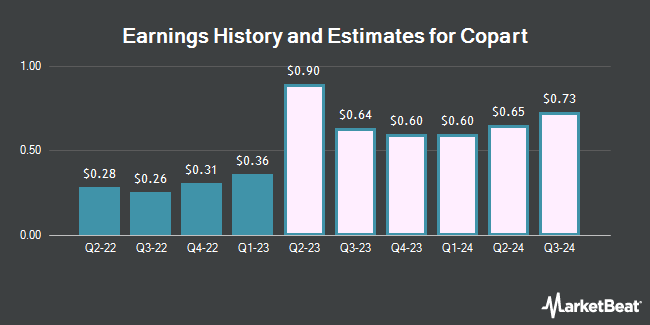 Receive News & Ratings for Copart Daily - Enter your email address below to receive a concise daily summary of the latest news and analysts' ratings for Copart and related companies with MarketBeat.com's FREE daily email newsletter.

Short Interest in Urban One Inc Drops By 24.5%