Complete the form below to receive the latest headlines and analysts' recommendations for Ecopetrol with our free daily email newsletter:

APG Asset Management N.V. raised its position in shares of Ecopetrol SA (NYSE:EC) by 17.2% during the first quarter, according to its most recent disclosure with the Securities & Exchange Commission. The institutional investor owned 1,231,500 shares of the oil and gas company’s stock after purchasing an additional 180,300 shares during the period. APG Asset Management N.V. owned approximately 0.06% of Ecopetrol worth $11,712,000 at the end of the most recent reporting period.

Ecopetrol (NYSE:EC) last announced its quarterly earnings results on Monday, May 11th. The oil and gas company reported $0.15 EPS for the quarter, missing analysts’ consensus estimates of $0.16 by ($0.01). The business had revenue of $4.28 billion during the quarter, compared to analysts’ expectations of $4.18 billion. Ecopetrol had a return on equity of 11.24% and a net margin of 17.10%. As a group, equities analysts predict that Ecopetrol SA will post 0.27 EPS for the current year.

Ecopetrol SA operates as an integrated oil and gas company. The company operates through three segments: Exploration and Production; Transport and Logistics; and Refining, Petrochemical, and Biofuels. It produces crude oil and gas; and engages in the extraction, collection, treatment, storage, commercialization, and pumping. 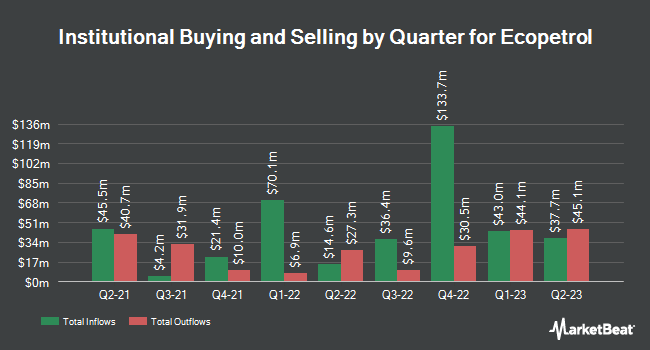