Complete the form below to receive the latest headlines and analysts' recommendations for CubeSmart with our free daily email newsletter:

Shares of CubeSmart (NYSE:CUBE) have been given an average rating of “Hold” by the twelve brokerages that are covering the stock, Marketbeat Ratings reports. Five analysts have rated the stock with a sell rating, five have issued a hold rating and one has issued a buy rating on the company. The average 1-year target price among brokerages that have updated their coverage on the stock in the last year is $28.75.

CubeSmart (NYSE:CUBE) last posted its quarterly earnings data on Thursday, May 7th. The real estate investment trust reported $0.20 earnings per share for the quarter, missing the Zacks’ consensus estimate of $0.40 by ($0.20). CubeSmart had a net margin of 26.18% and a return on equity of 9.53%. The company had revenue of $164.08 million for the quarter, compared to analysts’ expectations of $162.56 million. During the same period in the previous year, the firm earned $0.40 earnings per share. The firm’s quarterly revenue was up 7.4% on a year-over-year basis. On average, equities research analysts expect that CubeSmart will post 1.6 earnings per share for the current fiscal year.

CubeSmart is a self-administered and self-managed real estate investment trust. The Company's self-storage properties are designed to offer affordable, easily accessible and secure storage space for residential and commercial customers. According to the 2019 Self-Storage Almanac, CubeSmart is one of the top three owners and operators of self-storage properties in the United States. 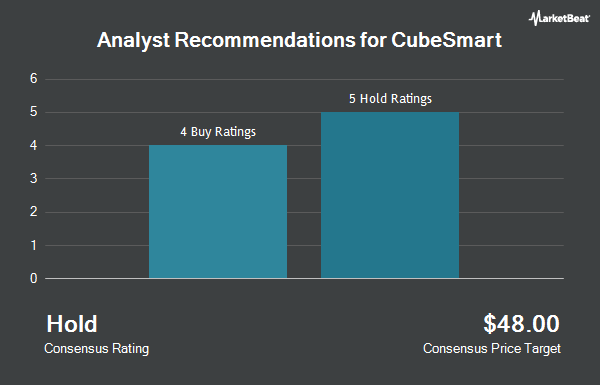