Complete the form below to receive the latest headlines and analysts' recommendations for MRC Global with our free daily email newsletter:

Shares of MRC Global Inc (NYSE:MRC) have received a consensus recommendation of “Buy” from the twelve ratings firms that are currently covering the firm, MarketBeat.com reports. One research analyst has rated the stock with a sell recommendation, three have assigned a hold recommendation and seven have issued a buy recommendation on the company. The average 1 year price objective among brokers that have issued a report on the stock in the last year is $9.71.

MRC Global (NYSE:MRC) last posted its quarterly earnings data on Tuesday, July 28th. The oil and gas company reported ($0.10) EPS for the quarter, topping the Zacks’ consensus estimate of ($0.22) by $0.12. MRC Global had a positive return on equity of 5.28% and a negative net margin of 8.86%. The company had revenue of $602.00 million for the quarter, compared to the consensus estimate of $587.81 million. During the same quarter in the previous year, the business earned $0.20 EPS. The company’s quarterly revenue was down 38.8% compared to the same quarter last year. On average, equities research analysts forecast that MRC Global will post -0.48 EPS for the current fiscal year.

MRC Global Inc, through its subsidiaries, distributes pipes, valves, fittings, and other infrastructure products and services to the energy industry in the United States, Canada, and internationally. The company supplies products across various markets, such as upstream, midstream, and downstream. It offers ball, butterfly, gate, globe, check, diaphragm, needle, and plug valves; and other products, such as lined corrosion resistant piping systems, control valves, valve automation products, and top work components, as well as measurement, steam, and instrumentation products. 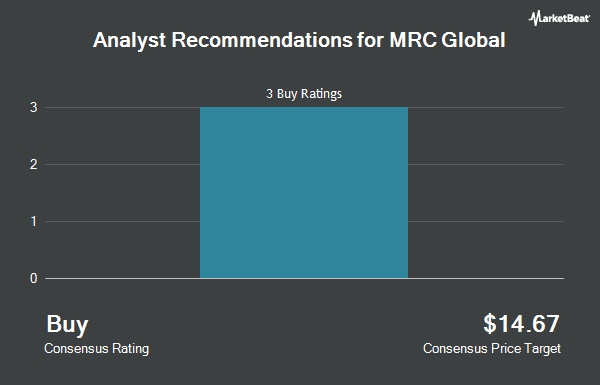 $1.77 Billion in Sales Expected for Fortive Corp This Quarter

$1.13 Billion in Sales Expected for Juniper Networks, Inc. This Quarter