Complete the form below to receive the latest headlines and analysts' recommendations for Amicus Therapeutics with our free daily email newsletter:

Bank of Montreal Can increased its stake in shares of Amicus Therapeutics, Inc. (NASDAQ:FOLD) by 9,442.6% during the 2nd quarter, Holdings Channel reports. The fund owned 72,333 shares of the biopharmaceutical company’s stock after acquiring an additional 71,575 shares during the period. Bank of Montreal Can’s holdings in Amicus Therapeutics were worth $1,145,000 as of its most recent SEC filing.

Amicus Therapeutics (NASDAQ:FOLD) last posted its quarterly earnings data on Monday, August 10th. The biopharmaceutical company reported ($0.20) EPS for the quarter, beating the consensus estimate of ($0.26) by $0.06. Amicus Therapeutics had a negative return on equity of 65.53% and a negative net margin of 129.10%. The business had revenue of $62.35 million for the quarter, compared to the consensus estimate of $62.66 million. As a group, equities research analysts forecast that Amicus Therapeutics, Inc. will post -1 earnings per share for the current fiscal year.

Amicus Therapeutics, Inc, a biotechnology company, engages in the discovery, development, and commercialization of medicines for various rare and orphan diseases. The company offers Galafold, an orally administered small molecule pharmacological chaperone for the treatment of Fabry disease. It is also conducting a Phase 1/2 clinical study of ATB200-02 for indications, including pompe disease.

Further Reading: What is insider trading?

Want to see what other hedge funds are holding FOLD? Visit HoldingsChannel.com to get the latest 13F filings and insider trades for Amicus Therapeutics, Inc. (NASDAQ:FOLD). 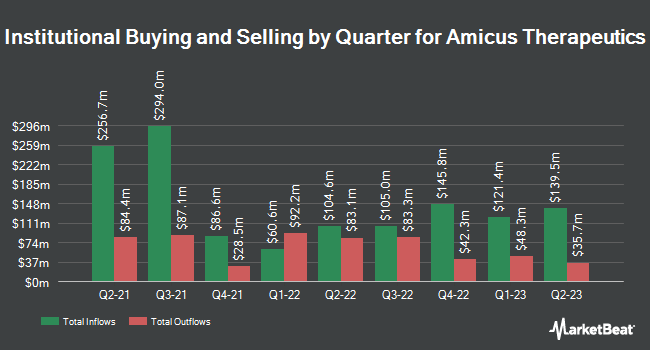