Complete the form below to receive the latest headlines and analysts' recommendations for Affimed with our free daily email newsletter:

Bank of Montreal Can Purchases 18,977 Shares of Affimed NV (NASDAQ:AFMD)

Bank of Montreal Can boosted its stake in shares of Affimed NV (NASDAQ:AFMD) by 7.5% during the second quarter, according to the company in its most recent filing with the Securities & Exchange Commission. The fund owned 271,832 shares of the biopharmaceutical company’s stock after acquiring an additional 18,977 shares during the quarter. Bank of Montreal Can owned approximately 0.36% of Affimed worth $1,251,000 as of its most recent SEC filing.

AFMD has been the subject of a number of analyst reports. SVB Leerink boosted their price target on Affimed from $7.00 to $8.00 and gave the company an “outperform” rating in a research note on Wednesday, June 24th. Zacks Investment Research cut Affimed from a “buy” rating to a “hold” rating in a report on Wednesday, July 1st. BidaskClub upgraded Affimed from a “sell” rating to a “hold” rating in a report on Friday, August 21st. Finally, Laidlaw restated a “buy” rating and set a $10.00 price target on shares of Affimed in a report on Sunday, August 9th. Two investment analysts have rated the stock with a hold rating and three have issued a buy rating to the company’s stock. Affimed has an average rating of “Buy” and an average target price of $7.67.

Affimed (NASDAQ:AFMD) last issued its earnings results on Tuesday, August 11th. The biopharmaceutical company reported ($0.16) EPS for the quarter, missing the consensus estimate of ($0.12) by ($0.04). Affimed had a negative return on equity of 133.60% and a negative net margin of 315.16%. The company had revenue of $3.23 million during the quarter, compared to the consensus estimate of $6.79 million. As a group, equities analysts anticipate that Affimed NV will post -0.49 EPS for the current fiscal year.

Affimed N.V., a clinical-stage biopharmaceutical company, focuses on discovering and developing cancer immunotherapies in the United States, Europe, and Germany. Its lead product candidate is AFM13, a natural killer cell (NK-cell) TandAb, which is in Phase 2a clinical study of relapsed CD30-positive lymphoma and Phase 1b clinical study of anti-PD-1 antibody Keytruda (pembrolizumab) in patients with relapsed Hodgkin lymphoma.

Want to see what other hedge funds are holding AFMD? Visit HoldingsChannel.com to get the latest 13F filings and insider trades for Affimed NV (NASDAQ:AFMD). 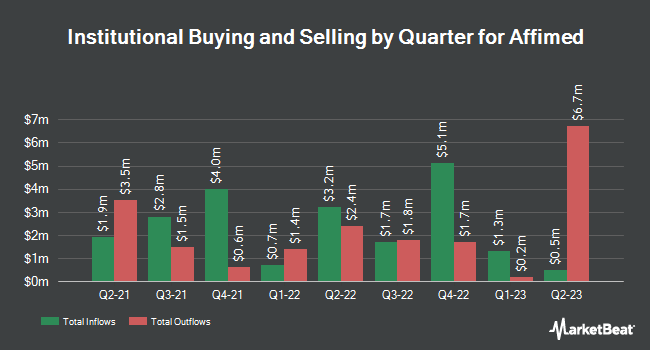 Receive News & Ratings for Affimed Daily - Enter your email address below to receive a concise daily summary of the latest news and analysts' ratings for Affimed and related companies with MarketBeat.com's FREE daily email newsletter.