Complete the form below to receive the latest headlines and analysts' recommendations for Energizer with our free daily email newsletter:

Energizer (NYSE:ENR) last issued its quarterly earnings data on Wednesday, August 5th. The company reported $0.50 earnings per share for the quarter, missing analysts’ consensus estimates of $0.59 by ($0.09). Energizer had a net margin of 0.16% and a return on equity of 42.46%. The company had revenue of $658.00 million for the quarter, compared to the consensus estimate of $640.27 million. During the same period in the previous year, the business earned $0.37 EPS. Energizer’s revenue for the quarter was up 1.7% compared to the same quarter last year. On average, equities research analysts predict that Energizer Holdings Inc will post 2.52 EPS for the current year.

The business also recently disclosed a quarterly dividend, which was paid on Thursday, September 10th. Investors of record on Thursday, August 20th were given a dividend of $0.30 per share. This represents a $1.20 dividend on an annualized basis and a yield of 2.99%. The ex-dividend date was Wednesday, August 19th. Energizer’s payout ratio is currently 40.00%.

In related news, Director Robert V. Vitale acquired 2,000 shares of the company’s stock in a transaction that occurred on Friday, August 14th. The shares were bought at an average price of $45.21 per share, with a total value of $90,420.00. Following the completion of the transaction, the director now directly owns 15,225 shares in the company, valued at $688,322.25. The acquisition was disclosed in a document filed with the Securities & Exchange Commission, which can be accessed through the SEC website. 2.40% of the stock is owned by company insiders.

Recommended Story: How to read a candlestick chart 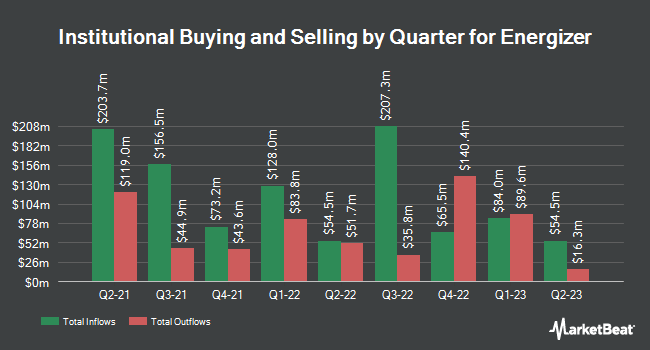