Janney Montgomery Scott LLC trimmed its stake in Amdocs Limited (NASDAQ:DOX) by 29.4% in the third quarter, according to the company in its most recent disclosure with the Securities & Exchange Commission. The institutional investor owned 28,809 shares of the technology company’s stock after selling 11,988 shares during the quarter. Janney Montgomery Scott LLC’s holdings in Amdocs were worth $1,654,000 at the end of the most recent reporting period.

DOX has been the subject of a number of recent analyst reports. Oppenheimer reaffirmed a “buy” rating and set a $75.00 price target on shares of Amdocs in a report on Wednesday, August 12th. JPMorgan Chase & Co. upgraded shares of Amdocs from a “neutral” rating to an “overweight” rating and set a $75.00 price target on the stock in a research note on Wednesday, November 11th. ValuEngine raised shares of Amdocs from a “sell” rating to a “hold” rating in a research note on Friday, November 6th. Finally, BidaskClub raised Amdocs from a “strong sell” rating to a “sell” rating in a report on Tuesday, November 17th. One equities research analyst has rated the stock with a sell rating, two have issued a hold rating and three have assigned a buy rating to the company. Amdocs presently has an average rating of “Hold” and an average price target of $75.00.

Amdocs (NASDAQ:DOX) last released its quarterly earnings data on Tuesday, November 10th. The technology company reported $1.23 earnings per share (EPS) for the quarter, topping the Zacks’ consensus estimate of $1.19 by $0.04. Amdocs had a net margin of 11.94% and a return on equity of 15.57%. The company had revenue of $1.05 billion for the quarter, compared to analysts’ expectations of $1.03 billion. During the same quarter in the prior year, the firm earned $1.08 EPS. The business’s revenue was up 2.2% on a year-over-year basis. Analysts anticipate that Amdocs Limited will post 4.45 EPS for the current year.

The firm also recently announced a quarterly dividend, which will be paid on Friday, January 22nd. Stockholders of record on Thursday, December 31st will be issued a $0.327 dividend. This represents a $1.31 annualized dividend and a dividend yield of 2.02%. The ex-dividend date of this dividend is Wednesday, December 30th. Amdocs’s dividend payout ratio is presently 31.26%.

Want to see what other hedge funds are holding DOX? Visit HoldingsChannel.com to get the latest 13F filings and insider trades for Amdocs Limited (NASDAQ:DOX). 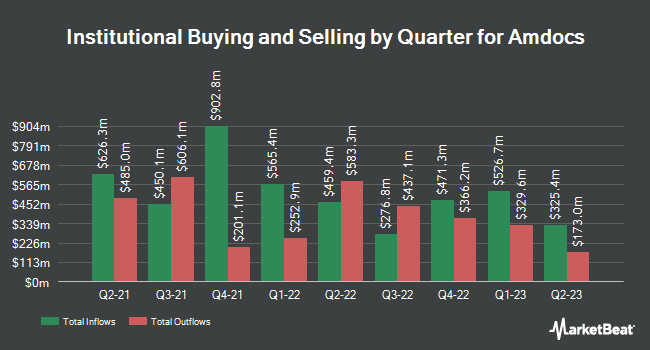