HM Payson & Co. boosted its stake in Quotient Limited (NASDAQ:QTNT) by 19,543.0% in the fourth quarter, according to its most recent disclosure with the Securities and Exchange Commission. The fund owned 98,215 shares of the company’s stock after purchasing an additional 97,715 shares during the quarter. HM Payson & Co. owned about 0.10% of Quotient worth $512,000 as of its most recent SEC filing.

In other news, insider Jeremy Stackawitz sold 30,000 shares of the company’s stock in a transaction dated Thursday, February 4th. The stock was sold at an average price of $5.14, for a total transaction of $154,200.00. Following the completion of the transaction, the insider now directly owns 112,926 shares of the company’s stock, valued at $580,439.64. The transaction was disclosed in a legal filing with the Securities & Exchange Commission, which can be accessed through this link. 12.30% of the stock is owned by corporate insiders.

Quotient (NASDAQ:QTNT) last posted its earnings results on Sunday, January 31st. The company reported ($0.29) earnings per share (EPS) for the quarter, meeting analysts’ consensus estimates of ($0.29). The firm had revenue of $8.75 million during the quarter, compared to analysts’ expectations of $8.40 million. Quotient had a negative return on equity of 2,307.27% and a negative net margin of 222.46%. Sell-side analysts forecast that Quotient Limited will post -1 earnings per share for the current year.

Separately, Zacks Investment Research raised Quotient from a “hold” rating to a “buy” rating and set a $8.00 target price for the company in a research note on Friday, December 11th.

Quotient Limited, a commercial-stage diagnostics company, develops, manufactures, and sells products for the global transfusion diagnostics market in the United States, France, Japan, and internationally. The company is developing MosaiQ, a proprietary technology platform, which provides tests for immunohematology and serological disease screening. 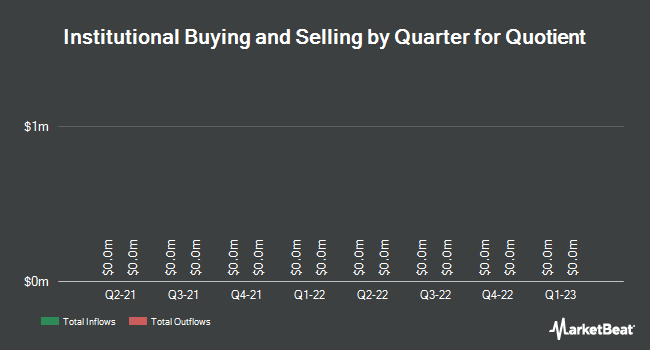 Receive News & Ratings for Quotient Daily - Enter your email address below to receive a concise daily summary of the latest news and analysts' ratings for Quotient and related companies with MarketBeat.com's FREE daily email newsletter.

$1.32 Earnings Per Share Expected for Whiting Petroleum Co. This Quarter

Rhythm Pharmaceuticals, Inc. Given Average Rating of “Buy” by Analysts

Skycoin Price Down 5.7% This Week

Complete the form below to receive the latest headlines and analysts' recommendations for Quotient with our free daily email newsletter: