CAE Inc. (NYSE:CAE) (TSE:CAE) has been assigned an average recommendation of “Buy” from the twelve ratings firms that are presently covering the stock, MarketBeat reports. Six analysts have rated the stock with a hold recommendation and six have assigned a buy recommendation to the company. The average twelve-month price target among brokerages that have covered the stock in the last year is $38.13.

CAE (NYSE:CAE) (TSE:CAE) last posted its quarterly earnings data on Thursday, February 11th. The aerospace company reported $0.22 EPS for the quarter, topping analysts’ consensus estimates of $0.17 by $0.05. CAE had a net margin of 2.07% and a return on equity of 9.35%. The firm had revenue of $832.40 million during the quarter, compared to analyst estimates of $822.43 million. During the same quarter last year, the business posted $0.37 EPS. The company’s revenue was down 9.9% on a year-over-year basis. As a group, sell-side analysts predict that CAE will post 0.32 EPS for the current fiscal year. 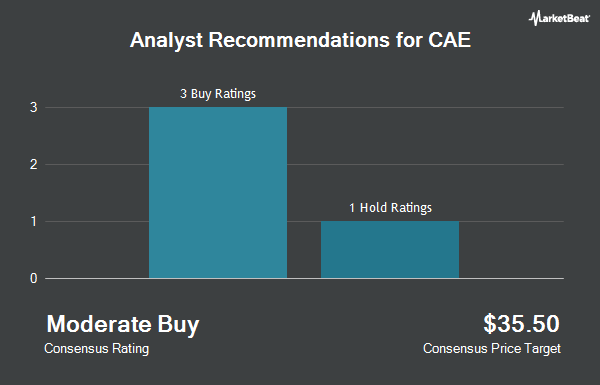