Watsco (NYSE:WSO) had its target price hoisted by equities researchers at Morgan Stanley from $233.00 to $244.00 in a research report issued on Monday, Stock Target Advisor reports. The brokerage currently has an “equal weight” rating on the construction company’s stock. Morgan Stanley’s target price points to a potential downside of 12.24% from the stock’s previous close.

Watsco (NYSE:WSO) last posted its quarterly earnings results on Thursday, February 11th. The construction company reported $1.14 earnings per share (EPS) for the quarter, topping the Thomson Reuters’ consensus estimate of $1.01 by $0.13. The business had revenue of $1.15 billion for the quarter, compared to analyst estimates of $1.13 billion. Watsco had a net margin of 4.77% and a return on equity of 13.38%. As a group, sell-side analysts expect that Watsco will post 6.48 EPS for the current fiscal year.

Watsco, Inc, together with its subsidiaries, distributes air conditioning, heating, and refrigeration equipment; and related parts and supplies in the United States, Canada, Mexico, and Puerto Rico. It offers residential ducted and ductless air conditioners, including gas, electric, and oil furnaces; commercial air conditioning and heating equipment systems; and other specialized equipment. 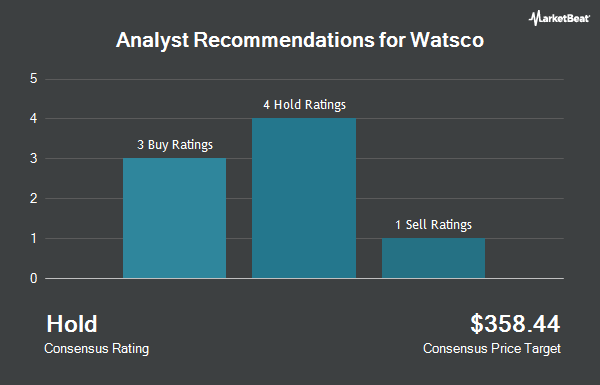