Shares of YPF Sociedad Anónima (NYSE:YPF) have been assigned a consensus rating of “Sell” from the seven brokerages that are currently covering the firm, MarketBeat reports. Five analysts have rated the stock with a sell rating and two have issued a hold rating on the company. The average 12 month price target among brokers that have covered the stock in the last year is $3.73.

Separately, Credit Suisse Group downgraded YPF Sociedad Anónima from a “neutral” rating to an “underperform” rating and lowered their price objective for the company from $5.00 to $3.00 in a research report on Thursday, January 14th.

YPF Sociedad AnÃ³nima, an energy company, operates in the oil and gas upstream and downstream activities in Argentina. The company engages in the exploration, development, and production of crude oil, natural gas, and liquefied petroleum gas (LPG). It is also involved in the refining, marketing, transportation, and distribution of oil, petroleum products, petroleum derivatives, petrochemicals, LPG, and bio-fuels, as well as in gas separation and natural gas distribution operations. 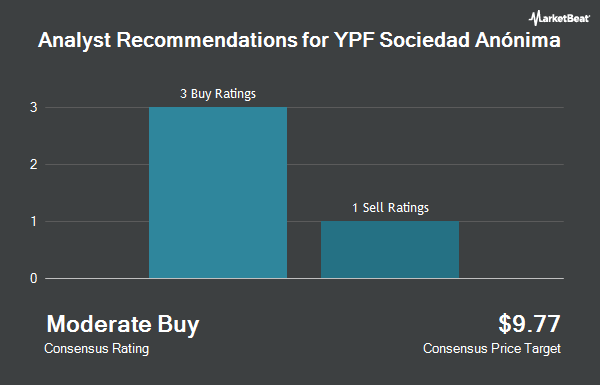