Equities analysts predict that Churchill Downs Incorporated (NASDAQ:CHDN) will announce earnings per share of $0.64 for the current quarter, according to Zacks. Two analysts have issued estimates for Churchill Downs’ earnings, with the lowest EPS estimate coming in at $0.62 and the highest estimate coming in at $0.65. Churchill Downs reported earnings of $0.05 per share in the same quarter last year, which would suggest a positive year-over-year growth rate of 1,180%. The firm is expected to report its next earnings results on Wednesday, May 5th.

On average, analysts expect that Churchill Downs will report full-year earnings of $4.98 per share for the current fiscal year, with EPS estimates ranging from $4.15 to $5.65. For the next fiscal year, analysts expect that the firm will report earnings of $7.87 per share, with EPS estimates ranging from $6.62 to $8.90. Zacks’ EPS calculations are a mean average based on a survey of research firms that cover Churchill Downs.

Churchill Downs (NASDAQ:CHDN) last released its quarterly earnings results on Tuesday, February 23rd. The company reported $0.19 earnings per share (EPS) for the quarter, missing the consensus estimate of $0.27 by ($0.08). The company had revenue of $278.20 million for the quarter, compared to the consensus estimate of $275.52 million. Churchill Downs had a positive return on equity of 11.09% and a negative net margin of 8.99%.

Several brokerages recently weighed in on CHDN. KeyCorp increased their target price on Churchill Downs from $239.00 to $250.00 and gave the company an “overweight” rating in a research note on Monday, March 8th. Bank of America began coverage on Churchill Downs in a research note on Monday, January 4th. They set a “buy” rating and a $235.00 target price for the company. Finally, Zacks Investment Research downgraded Churchill Downs from a “buy” rating to a “strong sell” rating in a research note on Tuesday, March 2nd. One analyst has rated the stock with a sell rating, one has assigned a hold rating and four have assigned a buy rating to the stock. The company has a consensus rating of “Buy” and a consensus price target of $207.67.

Further Reading: Why is the price-sales ratio important? 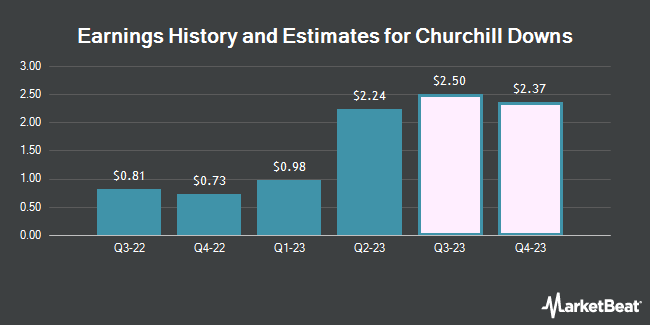