According to Zacks, analysts expect that Marsh & McLennan Companies will report full-year sales of $18.10 billion for the current fiscal year, with estimates ranging from $18.06 billion to $18.12 billion. For the next fiscal year, analysts expect that the business will post sales of $19.06 billion, with estimates ranging from $18.92 billion to $19.16 billion. Zacks’ sales averages are an average based on a survey of research analysts that that provide coverage for Marsh & McLennan Companies.

The business also recently declared a quarterly dividend, which will be paid on Friday, May 14th. Investors of record on Wednesday, April 7th will be given a $0.465 dividend. This represents a $1.86 dividend on an annualized basis and a dividend yield of 1.46%. The ex-dividend date of this dividend is Tuesday, April 6th. Marsh & McLennan Companies’s payout ratio is currently 39.91%.

Marsh & McLennan Companies, Inc, a professional services company, provides advice and solutions to clients in the areas of risk, strategy, and people worldwide. It operates in two segments, Risk and Insurance Services, and Consulting. The Risk and Insurance Services segment offers risk management services, such as risk advice, risk transfer, and risk control and mitigation solutions, as well as insurance and reinsurance broking, catastrophe and financial modeling, and related advisory services; and insurance program management services. 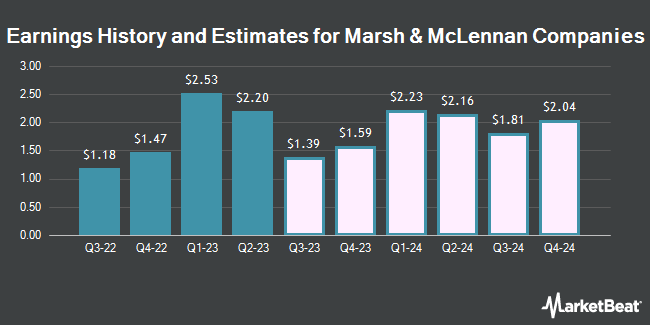