Entergy Co. (NYSE:ETR) COO Paul D. Hinnenkamp sold 3,000 shares of the company’s stock in a transaction that occurred on Wednesday, June 9th. The shares were sold at an average price of $107.28, for a total value of $321,840.00. The transaction was disclosed in a document filed with the Securities & Exchange Commission, which can be accessed through this link.

Entergy (NYSE:ETR) last issued its quarterly earnings results on Tuesday, April 27th. The utilities provider reported $1.47 earnings per share (EPS) for the quarter, beating the Zacks’ consensus estimate of $1.17 by $0.30. The firm had revenue of $2.84 billion during the quarter, compared to the consensus estimate of $2.60 billion. Entergy had a return on equity of 11.30% and a net margin of 15.41%. During the same quarter last year, the company posted $1.14 EPS. Analysts expect that Entergy Co. will post 5.96 earnings per share for the current year.

The company also recently announced a quarterly dividend, which was paid on Tuesday, June 1st. Investors of record on Thursday, May 6th were given a $0.95 dividend. The ex-dividend date was Wednesday, May 5th. This represents a $3.80 dividend on an annualized basis and a yield of 3.50%. Entergy’s payout ratio is 67.14%.

Entergy Corporation, together with its subsidiaries, engages in the production and distribution of electricity in the United States. The company generates electricity through gas/oil, nuclear, coal, hydro, and solar power sources. It operates in two segments, Utility and Entergy Wholesale Commodities. 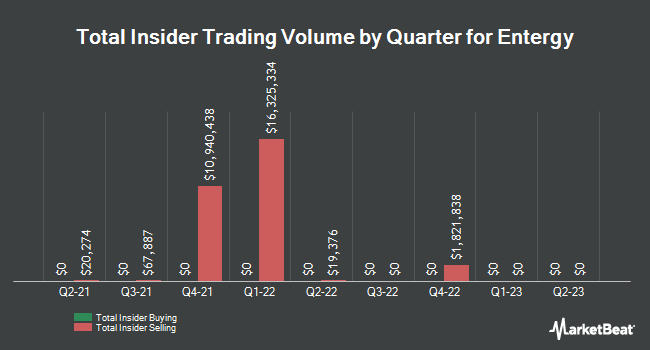 Receive News & Ratings for Entergy Daily - Enter your email address below to receive a concise daily summary of the latest news and analysts' ratings for Entergy and related companies with MarketBeat.com's FREE daily email newsletter.

Complete the form below to receive the latest headlines and analysts' recommendations for Entergy with our free daily email newsletter: