$74.24 Million in Sales Expected for CareDx, Inc (NASDAQ:CDNA) This Quarter

Wall Street analysts predict that CareDx, Inc (NASDAQ:CDNA) will announce sales of $74.24 million for the current fiscal quarter, according to Zacks Investment Research. Three analysts have made estimates for CareDx’s earnings. The lowest sales estimate is $73.39 million and the highest is $74.70 million. CareDx reported sales of $53.37 million during the same quarter last year, which would suggest a positive year over year growth rate of 39.1%. The business is expected to announce its next earnings results on Thursday, November 4th.

On average, analysts expect that CareDx will report full-year sales of $290.49 million for the current fiscal year, with estimates ranging from $289.60 million to $291.88 million. For the next fiscal year, analysts forecast that the company will post sales of $342.46 million, with estimates ranging from $338.26 million to $349.12 million. Zacks Investment Research’s sales calculations are a mean average based on a survey of sell-side research firms that cover CareDx.

CareDx (NASDAQ:CDNA) last issued its quarterly earnings data on Thursday, July 29th. The company reported ($0.04) earnings per share for the quarter, beating analysts’ consensus estimates of ($0.09) by $0.05. CareDx had a negative net margin of 3.53% and a negative return on equity of 2.39%. The business had revenue of $74.19 million for the quarter, compared to analysts’ expectations of $68.02 million.

CareDx, Inc operates as a transplant diagnostics company, which discovers, develops and commercializes diagnostic solutions. Its product includes AlloMap, AlloSure and Laboratory products. The company was founded on December 21, 1998 and is headquartered in South San Francisco, CA.

Further Reading: How does the Beige Book influence monetary policy? 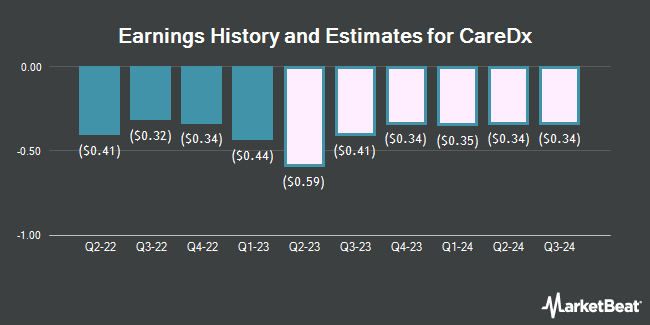 Receive News & Ratings for CareDx Daily - Enter your email address below to receive a concise daily summary of the latest news and analysts' ratings for CareDx and related companies with MarketBeat.com's FREE daily email newsletter.

$245.73 Million in Sales Expected for LivaNova PLC This Quarter

$74.24 Million in Sales Expected for CareDx, Inc This Quarter

Complete the form below to receive the latest headlines and analysts' recommendations for CareDx with our free daily email newsletter: