eBay (NASDAQ:EBAY)‘s stock had its “positive” rating restated by analysts at The Goldman Sachs Group in a report released on Monday, The Fly reports.

eBay (NASDAQ:EBAY) last released its earnings results on Wednesday, August 11th. The e-commerce company reported $0.99 earnings per share (EPS) for the quarter, beating the consensus estimate of $0.83 by $0.16. The company had revenue of $2.67 billion during the quarter, compared to analyst estimates of $2.64 billion. eBay had a return on equity of 38.34% and a net margin of 115.40%. During the same period in the prior year, the company posted $1.02 earnings per share. On average, equities analysts forecast that eBay will post 3.24 earnings per share for the current year.

eBay announced that its board has initiated a stock repurchase program on Wednesday, August 11th that authorizes the company to buyback $3.00 billion in outstanding shares. This buyback authorization authorizes the e-commerce company to reacquire up to 6.3% of its stock through open market purchases. Stock buyback programs are typically an indication that the company’s board of directors believes its stock is undervalued.

eBay, Inc operates as a commerce company. The company platforms include online marketplace and its localized counterparts, including off-platform businesses in South Korea, Japan, and Turkey, as well as eBay’s suite of mobile apps. The company technologies and services are designed to give buyers choice and a breadth of relevant inventory and to enable sellers worldwide to organize and offer their inventory for sale, virtually anytime and anywhere. 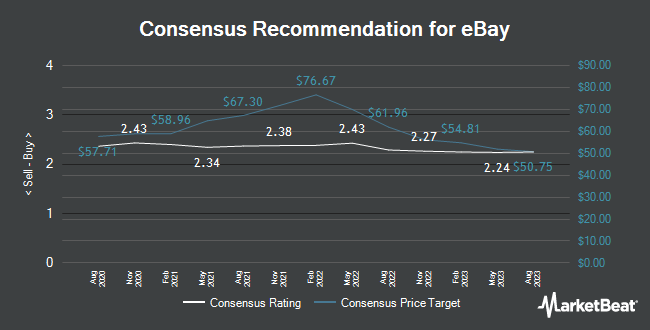 Receive News & Ratings for eBay Daily - Enter your email address below to receive a concise daily summary of the latest news and analysts' ratings for eBay and related companies with MarketBeat.com's FREE daily email newsletter.

Complete the form below to receive the latest headlines and analysts' recommendations for eBay with our free daily email newsletter: