BlackBerry (NYSE:BB) announced its quarterly earnings results on Tuesday. The company reported ($0.06) earnings per share for the quarter, beating the Thomson Reuters’ consensus estimate of ($0.07) by $0.01, MarketWatch Earnings reports. The business had revenue of $175.00 million during the quarter, compared to analysts’ expectations of $164.28 million. BlackBerry had a negative net margin of 61.56% and a positive return on equity of 1.02%. The firm’s revenue for the quarter was down 32.4% compared to the same quarter last year. During the same quarter in the prior year, the company posted $0.10 EPS.

In related news, COO Thomas Eacobacci sold 109,994 shares of the stock in a transaction dated Friday, July 23rd. The shares were sold at an average price of $10.06, for a total value of $1,106,539.64. Following the completion of the transaction, the chief operating officer now directly owns 281,294 shares in the company, valued at approximately $2,829,817.64. The sale was disclosed in a document filed with the SEC, which can be accessed through this hyperlink. 1.60% of the stock is owned by company insiders.

BlackBerry Ltd. engages in providing the intelligent security software and services to enterprises and governments. The firm leverages artificial intelligence and machine learning to deliver solutions in the areas of cyber security, safety, data privacy solutions, and also focuses in the areas of endpoint security, endpoint management, encryption, and embedded systems. 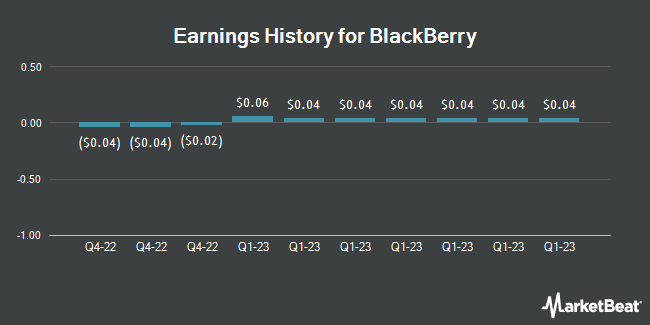 Complete the form below to receive the latest headlines and analysts' recommendations for BlackBerry with our free daily email newsletter: