Lord Abbett & CO. LLC lessened its stake in shares of Sleep Number Co. (NASDAQ:SNBR) by 28.8% in the 2nd quarter, according to its most recent 13F filing with the Securities & Exchange Commission. The fund owned 153,681 shares of the company’s stock after selling 62,072 shares during the period. Lord Abbett & CO. LLC owned 0.65% of Sleep Number worth $16,897,000 as of its most recent filing with the Securities & Exchange Commission.

A number of analysts recently issued reports on the company. Zacks Investment Research lowered Sleep Number from a “buy” rating to a “hold” rating in a report on Thursday, September 16th. TheStreet lowered shares of Sleep Number from a “c+” rating to a “d-” rating in a report on Tuesday, July 20th. Finally, Piper Sandler restated an “overweight” rating and set a $135.00 target price (down previously from $165.00) on shares of Sleep Number in a report on Wednesday, July 21st. One investment analyst has rated the stock with a sell rating, three have issued a hold rating and two have assigned a buy rating to the company. According to MarketBeat.com, the company has an average rating of “Hold” and a consensus price target of $121.80.

Sleep Number (NASDAQ:SNBR) last issued its quarterly earnings data on Monday, July 19th. The company reported $0.88 earnings per share (EPS) for the quarter, missing the Thomson Reuters’ consensus estimate of $1.17 by ($0.29). The company had revenue of $484.32 million during the quarter, compared to analyst estimates of $506.25 million. Sleep Number had a net margin of 9.37% and a negative return on equity of 75.84%. The business’s quarterly revenue was up 70.0% compared to the same quarter last year. During the same period last year, the firm earned ($0.45) EPS. On average, analysts expect that Sleep Number Co. will post 7.28 EPS for the current year.

Sleep Number Corp. designs, manufactures, markets, and distributes beds, proprietary beds, and other sleep-related accessory products. It offers beds under the brand name Sleep Number. The company was founded by Robert Walker and JoAnn Walker in 1987 and is headquartered in Minneapolis, MN.

Want to see what other hedge funds are holding SNBR? Visit HoldingsChannel.com to get the latest 13F filings and insider trades for Sleep Number Co. (NASDAQ:SNBR). 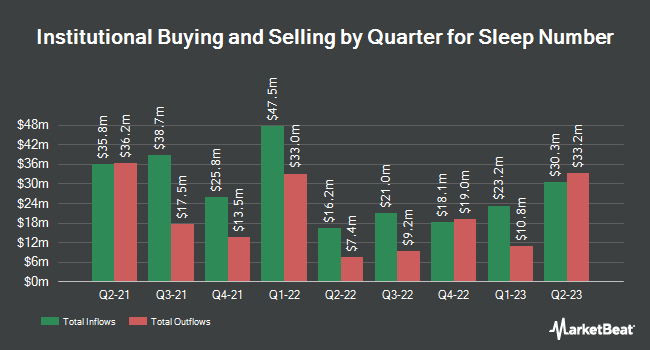 Varonis Systems, Inc. Given Consensus Rating of “Buy” by Brokerages

Dimecoin Trading Up 15.8% Over Last Week

Complete the form below to receive the latest headlines and analysts' recommendations for Sleep Number with our free daily email newsletter: