Wall Street analysts forecast that NeoPhotonics Co. (NYSE:NPTN) will report $79.56 million in sales for the current quarter, according to Zacks. Four analysts have issued estimates for NeoPhotonics’ earnings, with the lowest sales estimate coming in at $77.70 million and the highest estimate coming in at $80.68 million. NeoPhotonics reported sales of $102.40 million in the same quarter last year, which indicates a negative year-over-year growth rate of 22.3%. The business is scheduled to report its next quarterly earnings report on Monday, November 1st.

NeoPhotonics (NYSE:NPTN) last issued its quarterly earnings results on Tuesday, August 3rd. The semiconductor company reported ($0.22) EPS for the quarter, beating the Thomson Reuters’ consensus estimate of ($0.29) by $0.07. The business had revenue of $65.01 million during the quarter, compared to the consensus estimate of $62.53 million. NeoPhotonics had a negative net margin of 15.01% and a negative return on equity of 18.29%. 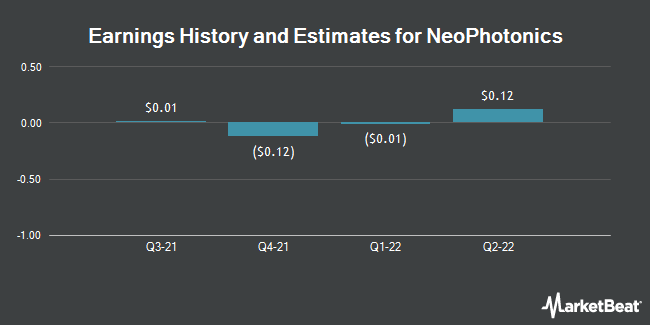 ReapChain Price Up 59.4% Over Last Week

Complete the form below to receive the latest headlines and analysts' recommendations for NeoPhotonics with our free daily email newsletter: