Analysts expect that Myriad Genetics, Inc. (NASDAQ:MYGN) will announce sales of $164.35 million for the current fiscal quarter, according to Zacks Investment Research. Four analysts have provided estimates for Myriad Genetics’ earnings, with the lowest sales estimate coming in at $156.77 million and the highest estimate coming in at $172.70 million. Myriad Genetics reported sales of $145.20 million during the same quarter last year, which indicates a positive year-over-year growth rate of 13.2%. The business is expected to report its next quarterly earnings report on Monday, November 8th.

On average, analysts expect that Myriad Genetics will report full year sales of $689.90 million for the current financial year, with estimates ranging from $678.68 million to $705.40 million. For the next year, analysts expect that the business will report sales of $677.62 million, with estimates ranging from $672.23 million to $680.30 million. Zacks’ sales calculations are an average based on a survey of research firms that that provide coverage for Myriad Genetics.

Myriad Genetics (NASDAQ:MYGN) last issued its quarterly earnings data on Tuesday, August 3rd. The company reported $0.12 earnings per share (EPS) for the quarter, topping the Zacks’ consensus estimate of ($0.09) by $0.21. Myriad Genetics had a negative return on equity of 4.29% and a negative net margin of 15.64%. The company had revenue of $189.40 million during the quarter, compared to the consensus estimate of $163.09 million. During the same period last year, the company earned ($0.31) earnings per share. The firm’s revenue was up 103.2% compared to the same quarter last year.

Separately, Raymond James began coverage on Myriad Genetics in a report on Tuesday, June 15th. They issued a “market perform” rating for the company.

Myriad Genetics, Inc engages in the discovery, development, and marketing of transformative molecular diagnostic test. It operates through the Diagnostics and Other segments. The Diagnostics segment provides testing and collaborative development of testing that is designed to asses an individual’s risk of developing a disease later in life.

Further Reading: How Does the Quiet Period Work? 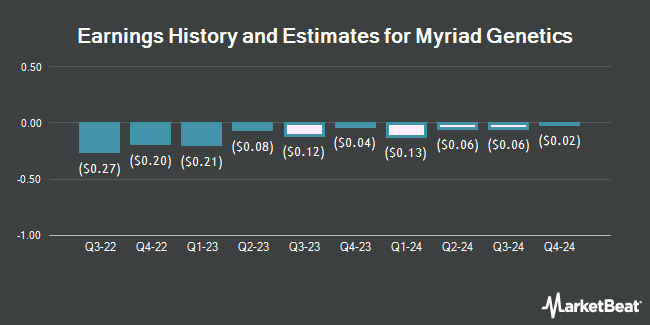 Cardano Price Down 1.1% Over Last Week

Complete the form below to receive the latest headlines and analysts' recommendations for Myriad Genetics with our free daily email newsletter: