OneWater Marine (NASDAQ:ONEW) updated its FY 2022 earnings guidance on Thursday. The company provided earnings per share (EPS) guidance of $7.200-$7.500 for the period, compared to the Thomson Reuters consensus estimate of $6.890. The company issued revenue guidance of -.

OneWater Marine (NASDAQ:ONEW) last announced its earnings results on Thursday, November 18th. The company reported $1.35 EPS for the quarter, topping the consensus estimate of $1.18 by $0.17. OneWater Marine had a net margin of 5.31% and a return on equity of 34.54%. During the same period in the prior year, the firm posted $0.90 EPS. As a group, research analysts predict that OneWater Marine will post 6.77 EPS for the current fiscal year.

OneWater Marine Inc operates as a recreational boat retailer in the United States. It offers new and pre-owned recreational boats and yachts, as well as related marine products, such as parts and accessories. The company also provides boat repair and maintenance services; arranges boat financing and insurance; and other ancillary services, including indoor and outdoor storage, and marina, as well as rental of boats and personal watercraft.

Read More: Why is Cost of Capital Important? 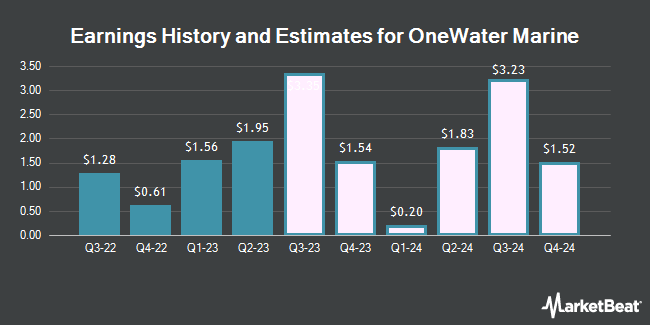 Complete the form below to receive the latest headlines and analysts' recommendations for OneWater Marine with our free daily email newsletter: