Vascular Biogenics (NASDAQ:VBLT) last issued its quarterly earnings results on Monday, November 15th. The biopharmaceutical company reported ($0.09) earnings per share (EPS) for the quarter, beating the Thomson Reuters’ consensus estimate of ($0.11) by $0.02. Vascular Biogenics had a negative return on equity of 69.23% and a negative net margin of 3,546.69%. During the same period in the prior year, the company earned ($0.12) EPS. Research analysts predict that Vascular Biogenics Ltd. will post -0.44 EPS for the current fiscal year.

VBLT has been the topic of several research analyst reports. Zacks Investment Research raised Vascular Biogenics from a “hold” rating to a “buy” rating and set a $2.50 price target on the stock in a research report on Friday, November 19th. HC Wainwright reaffirmed a “buy” rating and issued a $4.00 price target on shares of Vascular Biogenics in a research report on Tuesday, November 16th. Five analysts have rated the stock with a buy rating, According to MarketBeat, Vascular Biogenics presently has a consensus rating of “Buy” and a consensus target price of $5.10.

Vascular Biogenics Ltd. is in the clinical-stage biopharmaceutical company, which engages in the discovery, development, and commercialization of first-in-class treatments for cancer. Its programs include cancer, inflammation, and VB-600 which are focused on treating tumors, ovarian cancer, and chronic immune-related indications.

Featured Story: What is an economic bubble?

Want to see what other hedge funds are holding VBLT? Visit HoldingsChannel.com to get the latest 13F filings and insider trades for Vascular Biogenics Ltd. (NASDAQ:VBLT). 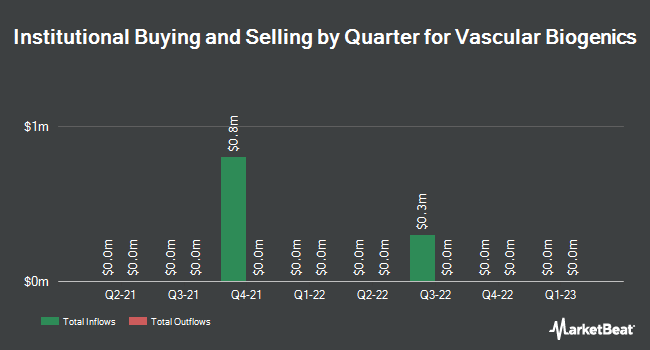 Tenaris S.A. Expected to Announce Earnings of $0.43 Per Share

Complete the form below to receive the latest headlines and analysts' recommendations for Vascular Biogenics with our free daily email newsletter: