Analysts expect Ginkgo Bioworks Holdings Inc (NYSE:DNA) to report $55.25 million in sales for the current quarter, Zacks reports. Two analysts have provided estimates for Ginkgo Bioworks’ earnings, with the lowest sales estimate coming in at $53.50 million and the highest estimate coming in at $57.00 million. The firm is expected to report its next earnings results on Monday, February 21st.

According to Zacks, analysts expect that Ginkgo Bioworks will report full year sales of $220.90 million for the current fiscal year, with estimates ranging from $218.80 million to $223.00 million. For the next year, analysts expect that the business will post sales of $271.35 million, with estimates ranging from $244.00 million to $298.70 million. Zacks Investment Research’s sales calculations are an average based on a survey of analysts that cover Ginkgo Bioworks.

Ginkgo Bioworks (NYSE:DNA) last posted its quarterly earnings results on Monday, November 15th. The company reported ($0.07) earnings per share for the quarter, missing the Zacks’ consensus estimate of ($0.04) by ($0.03). The company had revenue of $77.61 million during the quarter, compared to analysts’ expectations of $46.00 million.

Ginkgo Bioworks platform is enabling biotechnology applications across diverse markets, from food and agriculture to industrial chemicals to pharmaceuticals. Ginkgo Bioworks, formerly known as Soaring Eagle Acquisition Corp., is based in NEW YORK.

Recommended Story: What are the advantages to having securities held in street name? 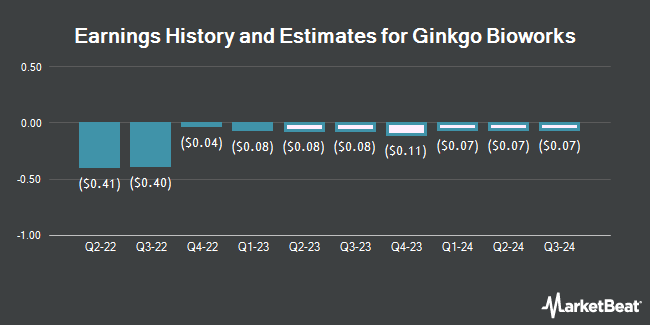 Vidulum Trading Up 7.1% This Week

Lepricon Price Down 16.9% Over Last Week

Complete the form below to receive the latest headlines and analysts' recommendations for Ginkgo Bioworks with our free daily email newsletter: