Equities analysts predict that Apartment Income REIT Corp. (NYSE:AIRC) will report $172.77 million in sales for the current fiscal quarter, Zacks Investment Research reports. Three analysts have made estimates for Apartment Income REIT’s earnings, with the highest sales estimate coming in at $179.16 million and the lowest estimate coming in at $165.06 million. Apartment Income REIT posted sales of $173.75 million during the same quarter last year, which suggests a negative year over year growth rate of 0.6%. The business is expected to report its next quarterly earnings results on Wednesday, February 9th.

According to Zacks, analysts expect that Apartment Income REIT will report full-year sales of $689.06 million for the current fiscal year, with estimates ranging from $636.01 million to $720.60 million. For the next year, analysts expect that the firm will post sales of $723.31 million, with estimates ranging from $682.73 million to $756.90 million. Zacks’ sales calculations are a mean average based on a survey of sell-side analysts that cover Apartment Income REIT.

The firm also recently announced a quarterly dividend, which will be paid on Tuesday, November 30th. Shareholders of record on Friday, November 12th will be issued a $0.44 dividend. This represents a $1.76 dividend on an annualized basis and a dividend yield of 3.31%. The ex-dividend date is Wednesday, November 10th. Apartment Income REIT’s dividend payout ratio is presently -382.61%.

AIR is a real estate investment trust focused on the ownership and management of quality apartment communities located in the largest markets in the United States. AIR is one of the country's largest owners and operators of apartments, with 99 communities in 12 states and the District of Columbia. 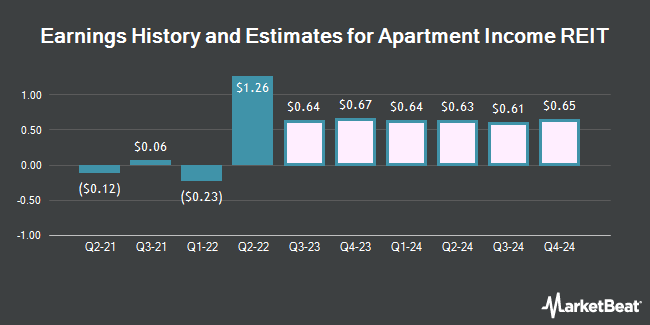 IPG Photonics Co. Given Consensus Rating of “Hold” by Brokerages

Complete the form below to receive the latest headlines and analysts' recommendations for Apartment Income REIT with our free daily email newsletter: