Deutsche Bank AG lifted its position in shares of Legend Biotech Co. (NASDAQ:LEGN) by 1,268.4% during the third quarter, according to the company in its most recent filing with the Securities and Exchange Commission. The institutional investor owned 104,955 shares of the company’s stock after buying an additional 97,285 shares during the period. Deutsche Bank AG owned about 0.07% of Legend Biotech worth $5,307,000 as of its most recent SEC filing.

Legend Biotech (NASDAQ:LEGN) last released its quarterly earnings results on Tuesday, November 16th. The company reported ($0.43) earnings per share for the quarter, missing the Thomson Reuters’ consensus estimate of ($0.35) by ($0.08). Legend Biotech had a negative net margin of 387.71% and a negative return on equity of 134.33%. The firm had revenue of $16.88 million for the quarter, compared to the consensus estimate of $12.50 million. Research analysts forecast that Legend Biotech Co. will post -1.43 EPS for the current fiscal year.

Legend Biotech Corporation, a clinical-stage biopharmaceutical company, through its subsidiaries, engages in the discovery and development of novel cell therapies for oncology and other indications in North America and internationally. Its lead product candidate, LCAR- B38M, is a chimeric antigen receptor for the treatment of multiple myeloma (MM), as well as a comparison of the treatment with standard triplet therapy in relapsed and refractory multiple myeloma.

Want to see what other hedge funds are holding LEGN? Visit HoldingsChannel.com to get the latest 13F filings and insider trades for Legend Biotech Co. (NASDAQ:LEGN). 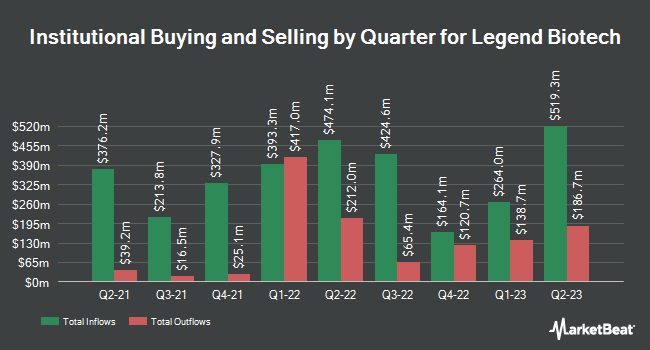 Complete the form below to receive the latest headlines and analysts' recommendations for Legend Biotech with our free daily email newsletter: