Renaissance Group LLC trimmed its holdings in shares of Constellium SE (NYSE:CSTM – Get Rating) by 23.3% in the fourth quarter, according to its most recent filing with the Securities and Exchange Commission (SEC). The institutional investor owned 379,794 shares of the industrial products company’s stock after selling 115,409 shares during the period. Renaissance Group LLC’s holdings in Constellium were worth $6,802,000 as of its most recent SEC filing.

Constellium (NYSE:CSTM – Get Rating) last posted its quarterly earnings data on Wednesday, April 27th. The industrial products company reported $1.20 EPS for the quarter, beating the consensus estimate of $0.21 by $0.99. The firm had revenue of $1.98 billion during the quarter, compared to analyst estimates of $1.88 billion. Constellium had a net margin of 5.76% and a return on equity of 100.02%. The company’s revenue for the quarter was up 47.6% on a year-over-year basis. During the same quarter last year, the business posted $0.15 EPS. As a group, equities analysts anticipate that Constellium SE will post 1.56 EPS for the current fiscal year.

About Constellium (Get Rating)

Constellium SE, together with its subsidiaries, engages in the design, manufacture, and sale of specialty rolled and extruded aluminum products for the packaging, aerospace, and automotive end-markets. The company operates through three segments: Packaging & Automotive Rolled Products, Aerospace & Transportation, and Automotive Structures & Industry.

Want to see what other hedge funds are holding CSTM? Visit HoldingsChannel.com to get the latest 13F filings and insider trades for Constellium SE (NYSE:CSTM – Get Rating). 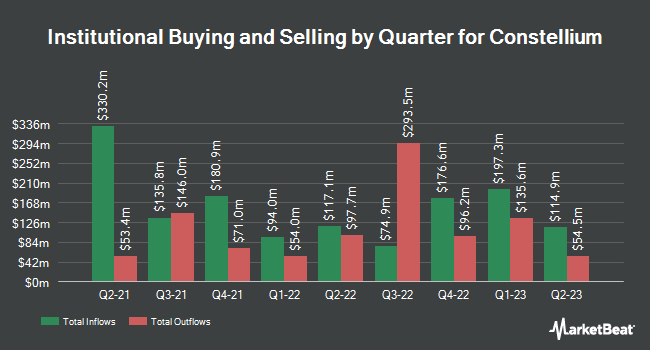 Complete the form below to receive the latest headlines and analysts' recommendations for Constellium with our free daily email newsletter: