RxSight, Inc. (NASDAQ:RXST – Get Rating) has received a consensus rating of “Buy” from the seven ratings firms that are presently covering the firm, MarketBeat.com reports. One equities research analyst has rated the stock with a sell rating and six have given a buy rating to the company. The average 12-month price objective among analysts that have issued ratings on the stock in the last year is $19.83.

A number of equities analysts have recently commented on RXST shares. Zacks Investment Research downgraded RxSight from a “hold” rating to a “sell” rating in a report on Tuesday, May 10th. Needham & Company LLC began coverage on RxSight in a report on Friday, April 8th. They set a “buy” rating and a $18.00 price objective on the stock.

RxSight (NASDAQ:RXST – Get Rating) last released its quarterly earnings data on Tuesday, March 8th. The company reported ($0.58) EPS for the quarter, topping analysts’ consensus estimates of ($0.60) by $0.02. The company had revenue of $8.43 million for the quarter, compared to the consensus estimate of $8.40 million. RxSight had a negative return on equity of 251.55% and a negative net margin of 212.04%. Sell-side analysts expect that RxSight will post -2.79 EPS for the current fiscal year.

About RxSight (Get Rating)

RxSight, Inc, a medical technology company, engages in the research and development, manufacture, and sale of light adjustable intraocular lenses (LAL) used in cataract surgery in the United States and internationally. It offers RxSight system that enables doctors to customize and enhance the visual acuity for patients after cataract surgery. 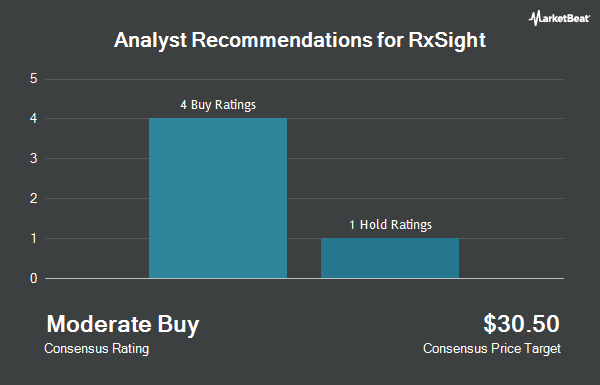 Receive News & Ratings for RxSight Daily - Enter your email address below to receive a concise daily summary of the latest news and analysts' ratings for RxSight and related companies with MarketBeat.com's FREE daily email newsletter.

Complete the form below to receive the latest headlines and analysts' recommendations for RxSight with our free daily email newsletter: