NiSource Inc. (NYSE:NI – Get Rating) has earned an average rating of “Moderate Buy” from the seven brokerages that are covering the stock, Marketbeat.com reports. Three analysts have rated the stock with a hold rating and three have given a buy rating to the company. The average 1-year target price among brokerages that have covered the stock in the last year is $31.40.

Several brokerages have recently commented on NI. Credit Suisse Group assumed coverage on NiSource in a research report on Monday, April 25th. They issued a “neutral” rating and a $32.00 target price for the company. StockNews.com assumed coverage on NiSource in a report on Thursday, March 31st. They issued a “hold” rating on the stock. Finally, Wells Fargo & Company upped their price objective on shares of NiSource from $31.00 to $35.00 and gave the company an “overweight” rating in a research note on Tuesday, April 19th.

NiSource (NYSE:NI – Get Rating) last issued its quarterly earnings results on Wednesday, May 4th. The utilities provider reported $0.75 earnings per share for the quarter, missing analysts’ consensus estimates of $0.76 by ($0.01). NiSource had a return on equity of 11.34% and a net margin of 13.70%. The company had revenue of $1.87 billion during the quarter, compared to analysts’ expectations of $1.69 billion. During the same period in the prior year, the business posted $0.77 EPS. As a group, sell-side analysts expect that NiSource will post 1.45 earnings per share for the current year.

The company also recently declared a quarterly dividend, which will be paid on Friday, August 19th. Stockholders of record on Friday, July 29th will be given a $0.235 dividend. This represents a $0.94 dividend on an annualized basis and a dividend yield of 3.43%. The ex-dividend date is Thursday, July 28th. NiSource’s dividend payout ratio is 61.44%. 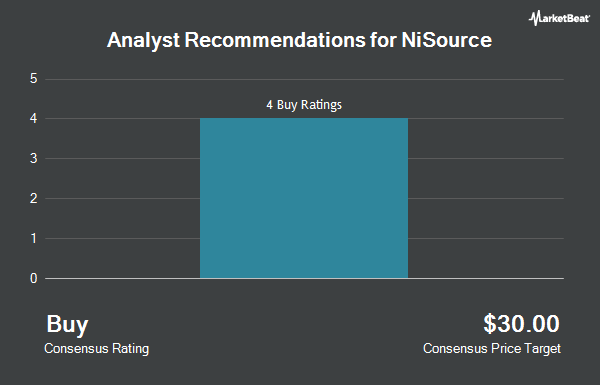 Receive News & Ratings for NiSource Daily - Enter your email address below to receive a concise daily summary of the latest news and analysts' ratings for NiSource and related companies with MarketBeat.com's FREE daily email newsletter.

Complete the form below to receive the latest headlines and analysts' recommendations for NiSource with our free daily email newsletter: