Guaranty Bancshares (NASDAQ:GNTY – Get Rating) last announced its quarterly earnings results on Monday, July 18th. The company reported $1.06 earnings per share (EPS) for the quarter, beating the consensus estimate of $0.79 by $0.27. Guaranty Bancshares had a return on equity of 14.85% and a net margin of 30.53%. The firm had revenue of $32.93 million during the quarter, compared to the consensus estimate of $31.20 million. During the same period in the prior year, the firm earned $0.77 EPS. Research analysts anticipate that Guaranty Bancshares will post 3.48 EPS for the current fiscal year.

Guaranty Bancshares, Inc operates as the bank holding company for Guaranty Bank & Trust, N.A. that provides a range of commercial and consumer banking products and services for small- and medium-sized businesses, professionals, and individuals. The company offers checking and savings, money market, and business accounts, as well as certificates of deposit; and commercial and industrial, construction and development, 1-4 family residential, commercial real estate, farmland and agricultural, multi-family residential, and consumer loans. 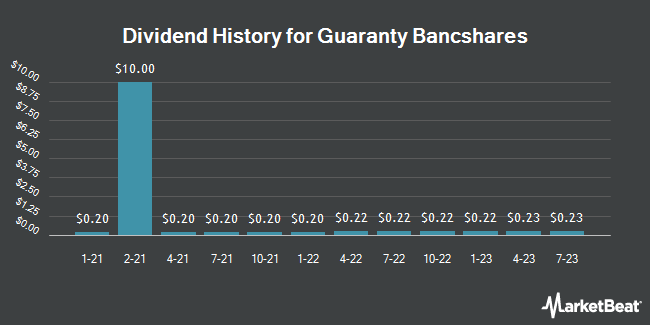 Complete the form below to receive the latest headlines and analysts' recommendations for Guaranty Bancshares with our free daily email newsletter: