Is Sitting As Dangerous As Smoking? 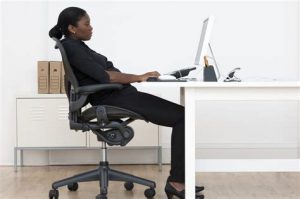 According to new data from the United States Centers for Disease Control and Prevention, roughly 25 percent of Americas sit for more than eight hours a day.  Published in JAMA, the study analyzed data recorded in the National Health and Nutrition Examination Survey (NHANES), which collects a representative sample of health information in adults over the age of 18.  For this study, 6,000 people responded to report the number of hours they sit every day, including not only at work and at home but also factors like the daily commute.  The study also examined how many hours of moderate-to-vigorous physical activity they got each week.

Sure enough, roughly one-fourth of these respondents said they spent eight hours a day in a seated position.  In addition, less than 45 percent said they did not get any moderate-to-vigorous physical activity in any seven day period. Furthermore, another 11 percent said they more than eight hours sitting every day and only performed very minimal leisure physical activity.  Finally, only three percent of adults in the survey reported sitting for less than four hours a day and were also active during those times they were not seated.

This study is very important right now because health experts actually consider extensive sitting to be as dangerous as smoking because both of these habits are associated with a wide variety of health problems. Previous studies intimate that long periods of sitting seems to increase the risk of heart problems and even certain types of cancer; and, of course, early death.

Experts say that these negative health effects are commonly due to a combination of things that sitting actually does to the body. For one, sitting can lead to weight gain; it can also lead to poor circulation: and both of these are common risk factors for heart disease.  Furthermore, extensive sitting can lead to higher blood pressure, higher blood sugar, higher obesity risk, abnormal cholesterol levels, and excess mid-section body fat.

To combat the negative effects of sitting, then, the same experts advise that you should optimize your physical activity to about 60 to 75 minutes a day.  This exercise should be moderate, at least, but the more intense you can make it, the better. Also, health experts advise that simply getting up from your seat once in while (like when at your desk in the office) helps to reduce these risks.